Me in a nutshell: silly, pedantic, or both

I found a bit of a gem in the spam filter – a drive-by comment in which somebody really didn’t think through all the implications of what they were saying.

I’ve released the comment back into the wild here:https://camestrosfelapton.wordpress.com/2017/07/24/the-other-kind-of-alt-history/#comment-8754 It was in reply to my post about the politics of calling the invasion by Britain of Australia in the 18th century an “invasion”.

“Australia owes a debt to the people whose land was taken.”
Those people died a long time ago. Nobody stole from the ones alive today.
By the way, where are my reparations for the Highland Clearances? I’m sure somebody owes me a bundle, by your reckoning.

And wow – no sarcasm but those are nearly good points but which collectively stab right at the heart of modern capitalism.

I’ll nit pick first: “Nobody stole from the ones alive today.” I assume this is just ignorance on his part. Australia’s indigenous population was robbed in living (and deeply painful memory) of many of its children https://en.wikipedia.org/wiki/Stolen_Generations I assume that wasn’t what he was thinking of – he meant land/territory and of course even that is debatable.

But let’s look at this point by point:

That last point is a way of sarcastically attacking the notion of restitution for historical theft by pointing to the impracticability of paying people back but again, I’ll park that issue to one side for a moment.

Instead, let’s flip this around. The Highland Clearances were a long time ago. The people who did the stealing are also long dead. So, nothing to see here move along? No. Scotland STILL to this day has some of the most inequitable land ownership in Western Europe. 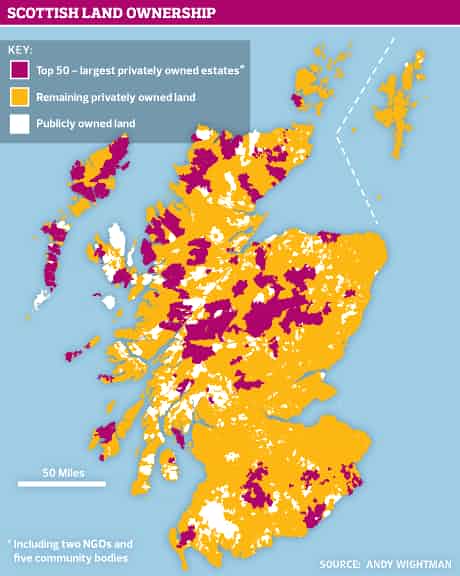 This image is from a Guardian article entitled (unsurprisingly) Scotland has the most inequitable land ownership in the west.  That inequity continues and causes real damage to people’s lives – and be warned the story and the quote below includes a case of suicide.

“Last October, on a farm near Edinburgh, the body of Andrew Riddell, a tenant farmer, was discovered. He and his family had worked on the farm for more than 100 years and then, one day, he was given notice to quit by his landlord, Alastair Salvesen, billionaire and Scotland’s third-richest man. The notice followed a year-long legal case which finally found in favour of Salvesen. The judge ruled that the protections Riddell thought he had in the tenancy arrangement were trumped by the landlord’s rights under the European Convention on Human Rights. He killed himself after collecting his final harvest.”

This inequity stems from land taken in the 17th century onwards. The land was taken and then the wealth passed down by inheritance. The original grab may have been theft (if not legally then morally and by modern standards) but then the people who gained by that wealth were sure to demand the protection of the laws of property right and inheritance AND STILL DO.

The idea that it was all so long ago only works as the basis for ignoring the issue when considering the theft. The benefit of the theft remains protected by inheritance. To say nothing was stolen from those alive today requires us to discount any wealth/land/territory they might have otherwise inherited. Perhaps we SHOULD discount that but then it would need to be discounted for all surely? Would the commenter argue for the abolition of inheriting property? Now there’s a radical notion. Need we go that far? After all, IF IT DOESN’T MATTER if the person is dead then taxation of inheritance is not only not theft by legal standards but presumably isn’t theft even by the standards of the conservative defenders of property rights.

The impact of the theft is still visible today, even in a modern developed nation such as Scotland. The original crime still has an impact, and we can see, by looking at Scotland and the Scottish people how this has played out over the centuries and how, despite otherwise very different situations regarding culture, freedom of movement, and political rights between the displaced land workers of 17th century Scotland and the Aboriginal peoples of Australia that there are outcomes in common:

That isn’t to say every possible individual must fall into one of two camps or that many descendants of the Scots who emigrated to the new world haven’t prospered. Economics isn’t a zero sum game and the historical theft of land is not the only thing in play. Where Australia’s indigenous peoples would not gain political rights until late in the twentieth century, emigrating Scots found new opportunities and new political rights in the new nations that grew around the colonisation by Europeans of Australasia and North America.

But, maybe it is the last point alluded too that matters. Maybe it is all just too hard to undo. You can’t fix history and you can’t possibly work out who owes who what?

Well let’s go back to the 18th century and ASK somebody.

In 1795 Thomas Paine wrote a pamphlet called “Agrarian Justice“. It was written in response to what was then a major piece of privatisation – the sale by the crown of royal and common land. While that land had not been directly owned by ordinary people, it was land that they typically had use of. This shift of land from common use to private ownership had been occurring for centuries (Paine argues that has been occurring since the beginnings of agriculture) but it has also been creating poverty for some. In Paine’s time, that creation of poverty was painfully visible in Europe – causing a population shift from the countryside to the cities.

Paine’s pamphlet is far from perfect but it has some deep insights. Firstly he identified this loss of access to land as a cause of poverty. He also identified INHERITANCE as a force that then makes that split between poverty and wealth generational. Finally, his solution feels breathtakingly modern: tax inheritance and use the money to pay an old-age pension for everybody.

“In advocating the case of the persons thus dispossessed, it is a right, and not a charity, that I am pleading for. “

Paine is often portrayed as a proto-socialist but his arguments typically rest on principles that sit closer to modern libertarianism:

His thinking is still the thinking of somebody shaped by the 18th century and the Enlightenment (e.g. Rousseau-like notions of a kind of positive natural state for humanity). What makes him feel modern is his tendency to focus on practical social-policy solutions to problems of economic inequity i.e. he draws on ‘classic liberalism’ to reach conclusions that are currently seen as leftist.

Agrarian Justice essentially argued for a kind of Universal Basic Income funded by inheritance tax. The moral justification being one based on notions of property and justice.

Is this the best way to address the debts of the past? I don’t know but it certainly is a way. By providing for all it does not require to identify who lost what and when. By taking only from inheritance it addresses only that wealth that can be inherited. Everybody is paid and everybody can (in principle) pay. The inequities of old crimes are not resolved over night but the approach limits their effect on further generations. Nor does this approach prevent other more specific ways of compensating the heirs of those who were robbed of land, opportunities and rights.