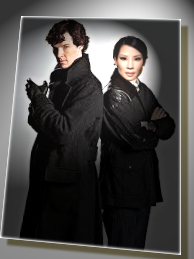 In the US a Christian college is sanctioning a member of its staff who asserted that Islam worships the same god as Christianity. Apparently this is a controversial notion and at odds with the college’s official doctrine. Now for an atheist the argument is a bit like asking whether Benedict Cumberbatch and Johnny lee-Miller both play the character called Sherlock Holmes on television. Now that is a really fun argument to have but not one likely to get you sacked from your job if you take the wrong position. However, for people who are followers of the so-called Abrahamic religions this can be an important question.

Interestingly, it is a debate that is burning away over at Vox Day’s blog

END_OF_DOCUMENT_TOKEN_TO_BE_REPLACED

[I’m putting some additional Tybalt opinions at the end]

It is a rule of blogging that a blog in search of hits must blog on the topics that have received hits. Such is the way of the blog.

The recent posts on the Sandifer-Day discussion received some nice slow-burn attention from directions other than File 770. Which was nice. So to break that winning streak I’m going to waffle on more about the Hugo puppy-nominated story “One Bright Star To Guide Them”. Specifically I am going to consider whether Tybalt the Talking Cat makes any allegorical sense whatsoever.

To recap “One Bright Star To Guide Them” is a story that looks at some characters in adulthood who, as children, went on a Narnia like adventure. The author is John C Wright and it was edited by Vox Day. It is one of several works by Wright that received a Hugo nomination this year (2015) because of the Rabid Puppy slate.

In the story the hero is Thomas and he has lived a somewhat successful,life since his childhood struggle against the forces of evil. His return to this supernatural struggle is heralded by the appearance of talking cat (yay!) called Tybalt. For most of the story Tybalt the Talking Cat guides Thomas through a series of conflicts and encounters with his former childhood companions.