I appreciate a nice polyhedron but as an area of interest it isn’t one prone to many events. The regular polyhedra were fully classified a very long time ago and while that’s just one set of an infinite space of 3D objects with polygonal faces. If you allow for curves or slightly curved, almost polygons then there is a lot to play with but not many objects stand out from the crowd.

Anyway, biology to the rescue! An article in Nature (https://www.nature.com/articles/s41467-018-05376-1 ) looks at the issue of cell-packing. Our cells are squishy 3D objects that pack together to form tissue. Now getting objects to pack together to fill a space efficiently is a well-known and difficult to solve problem if you dealing with anything other than cubes. Hexagonal prisms are a solution that crops up in nature in places such as basalt rock formations and bee hives (and presumably bee hives made out of basalt on some planet with magma bees and honey volcanoes).

In 2D one way of filling a plane with irregular but simple polygons is a Voronoi pattern. Arrnagments of cells in a layer looked at ‘top-down’ can (apparently) resemble that kind of pattern but that doesn’t help describe the 3D aspect of the cells. Prisms don’t work because the ‘top’ face may be smaller than the ‘bottom’ face. Frustrums (chopped off pyramids) don’t work because the ‘top’ and ‘bottom’ faces maybe polygons of different sizes and frustrums don’t neccesarily pack nicely. Enter the scutoid.

Scutoids are (apparently, I’m just reading the paper) messed up prisms. The example picture shows a shape with a pentagon-bottom and a hexagon-top and the vertices of each polygon joined by  curved edges with the exception of an additional triangular face. Flip the same shape upside down and they can nestle into each other. Which is sweet.

So not quite polyhedra, crazy mixed up nearly prisms that know how to pack. The picture of the beatle is there because of the distinct pattern of five shapes – specifically that little triangle at the top where the line between the carapace covering the wing splits. The combination of faces on the scutoid reminded the researchers of the beatle and the ‘scutoid’ name is derived from that. 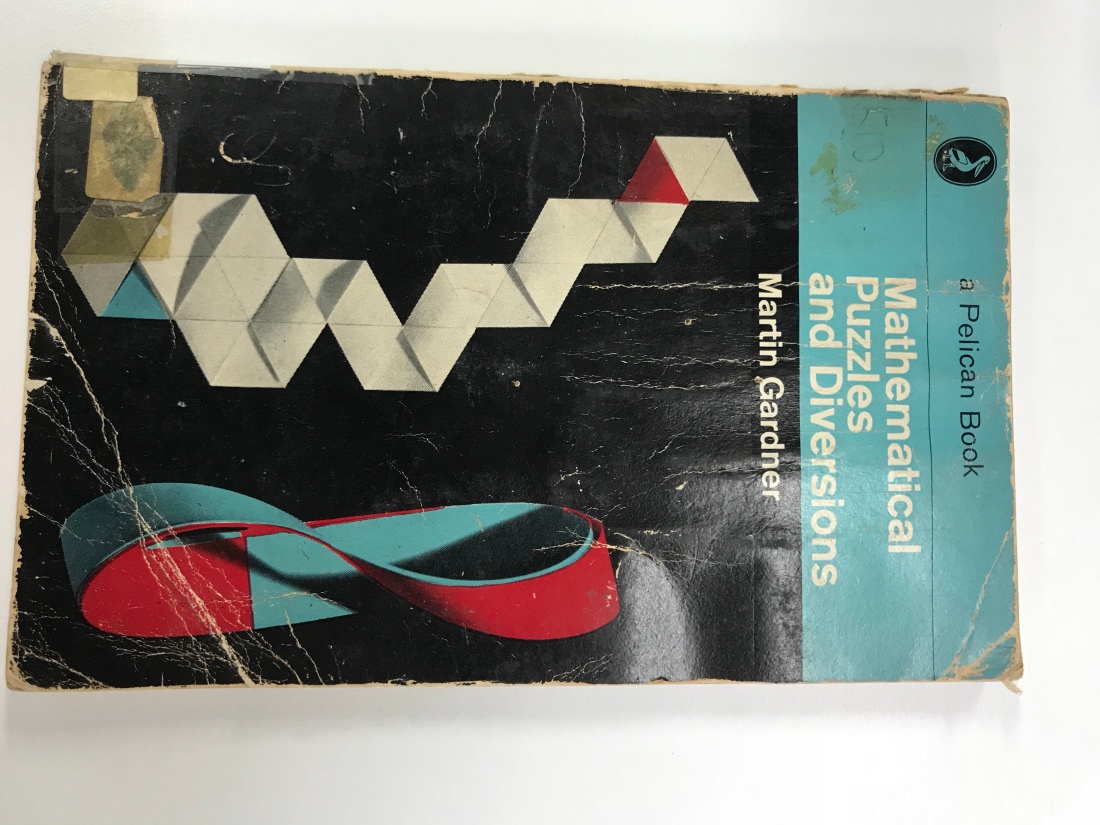 After the previous post I went hunting to see if I had still had this and amazingly I did! This was rescued from the school library when I was a teenager and they were throwing away some old books.

Unfortunately, I can’t claim much virtue here as a rescuer of unloved books because…oh dear…look at what I did: 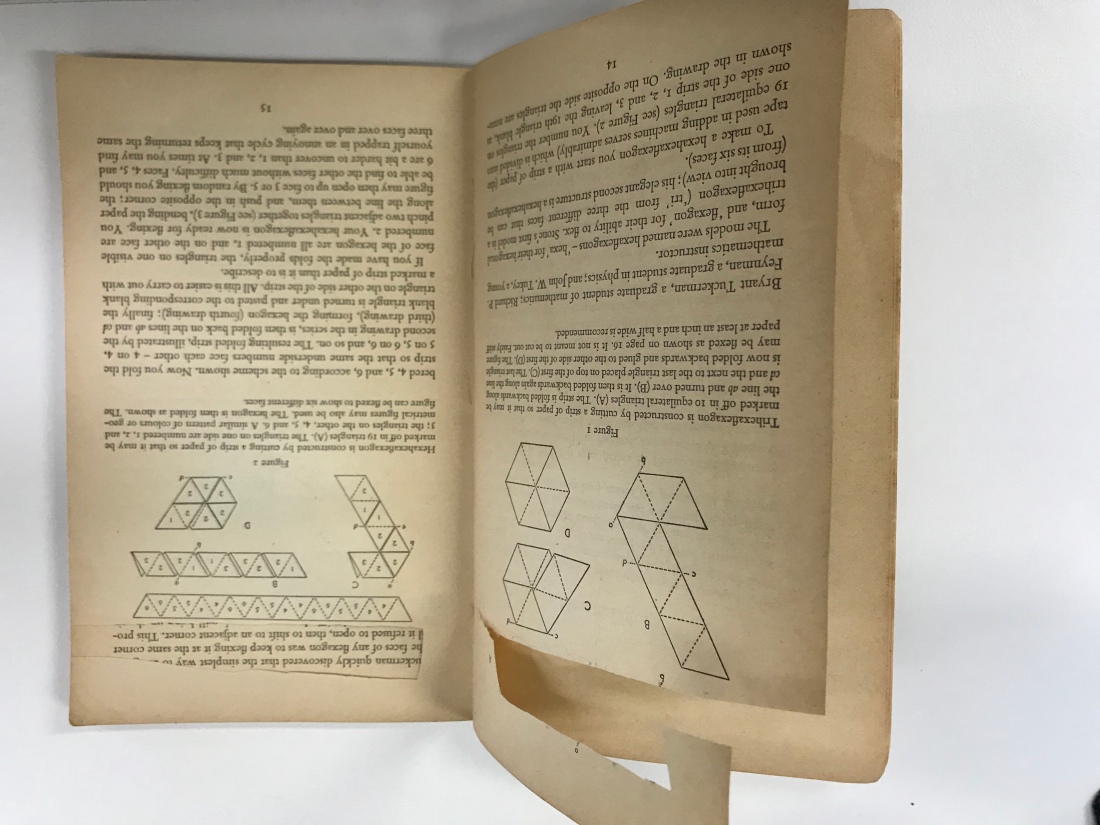 I cut out some of the diagrams from the hexaflexagon chapter. May the book gods forgive me.

This is the UK Pelican edition of the first collection of Gardener’s columns from Scientific American.

I wanted to write about some of the interesting things people have been saying about reviewing but part of my brain obviously wants to talk about reason and evidence and those sorts of things. I guess I haven’t done much of that this year in attempt to look less like a philosophy professor.

Anyway – objectivity! The thing with objectivity as a word is that we (including myself) use it in a way that implies various things which maybe aren’t really part of what it means. Objectivity carries positive connotations and connotations of authority in contrast to subjectivity. Those connotations suggest impartial judgement and a lack of bias. That’s all well and good – words can mean whatever a community of users want them to mean but I think it creates confusion.

Here is a different sense of ‘objective’ – to say something is objective is to say that two people can follow the same steps/process and come up with the same answer reliably. Maybe we should use a different word for that but such processes are often described as ‘objective’ because they clearly contrast with subjective judgement.

The thing is that meaning does not in ANYWAY imply a lack of bias. Lots of systematic or automated processes can contain bias. Indeed we expect there to be biases in, for example, processes for collecting data. More extreme examples include machine learning algorithms which are inherently repeatable and ‘objective’ in that sense (and the sense that they operate post-human judgement) that nonetheless repeat human prejudices because those prejudices exist in the data they were trained on.

Other examples include the data on gender disparity in compensation for Uber drivers – the algorithm was not derived from human prejudices but there was still a pay disparity that arose from different working patterns that arose from deep-seated social disparities.

However, there is still an advantage here in terms of making information and data gathered more objective. Biases may not be eliminated but they are easier to see, identify and quantify.

Flipping back to ‘subjective’, I have discussed before both the concept of intersubjectivity (shared consensus opinions and beliefs that are not easily changed) as well as the possibility of their being objective facts about subjective opinions (e.g. my opinion that Star Trek: Discovery was flawed is subjective but it is an objective fact about the universe that I held that opinion).

Lastly the objective aspect of data can be mistaken for the more subjective interpretation of the data. In particular the wider meaning or significance of a data set is not established simply by the fact that the data is collected reliably or repeatedly.

Consider another topic: IQ. I’ve discussed before aspect of IQ and IQ testing and much of the pseudoscientific nonsense talked about it. Look at these two claims between Roberta and Bob: 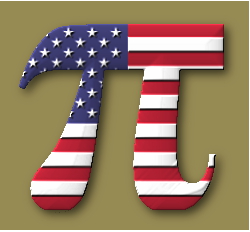 This a belated American Pi Day post. I say ‘American Pi’ day not for an opportunity to make Don Mclean puns but because March 14 only looks pi-like if you do the month/date thing. Elsewhere it was 14/3, which could be 1.43 day or less-good-square-root-of-2 day (Feb 14 being better but Dec 14 being best). For the day/month people July 22 makes a better Pi day as it gives the classic rational approximation of 22/7.

I was asked where I stood on the issue of Pi being invented or discovered. I’m firmly in the discovervented camp.

The ‘discover’ camp tends towards Platonism – the idea that mathematics is not just real but really real. Indeed mathematics in Platonism is more real than reality, which is just a crappy shadow of truth, goodness and all things geometrical. Discovered feels right but if you follow the reasoning you end up having to swallow a very big metaphysical pill.

The ‘invented’ camp tends towards Formalism – the idea that mathematics is the logical outcomes of arbitrarily chosen rules. I’m much more inclined towards formalism but it can feel a bit arbitrary. After all we could make up all sorts of self-consistent logical schemes and prove empty theorems about them but we don’t. The ones we study in mathematics not only tend to be relevant ones but have had an uncanny knack of BECOMING relevant.

Aristotle pitched his tent just a little way away from Plato. From him mathematics was something embedded in the universe but maybe not as transcendental as Plato took it to be.
From Kant and modern notions of evolution and modern psychology and neuroscience we get an alternate notion of embedding – that mathematics is something kind of built into us and the way we make sense of the universe.

I’ll play pick and mix with all that. I do tend towards FICTIONALISM as a model of mathematical truth, which marries nicely with formalism. That is a mathematical truth like 2+3=5 is true in a similar sense as ‘Sherlock Holmes lived at 221b Baker Street’. Mathematics is a kind of fiction, a work of imagination but as any writer knows your imagination is constrained by your experience and by your contact with reality and by what makes sense and by what is self-consistent.

Mathematics is like that as well. We invent it to describe the world around us but in doing so we create a space which we explore within rules and then discover things. If we invent the abstract notion of a ‘circle’ based on our real world experiences of circles and a concept of ‘diameter’ and ‘circumference’ then we discover in our inventions a little pi, like an alchemic homunculus. Which is all well a good but then we find the same little fellow starting out at us in our other inventions and we begin to suspect Plato was right all along.

But if mathematics is fiction, what kind of fiction is it? Well in modern times we associate it with science but in the past it has played nicely with mystical and religious disciplines as well. Mathematics is like some strange kind of genre, a genre that can encompass imaginary realities, alternative sciences but also magic and fantastical worlds all within a broader notion of the weird and the speculative. Mathematics is the ultimate SF/F.