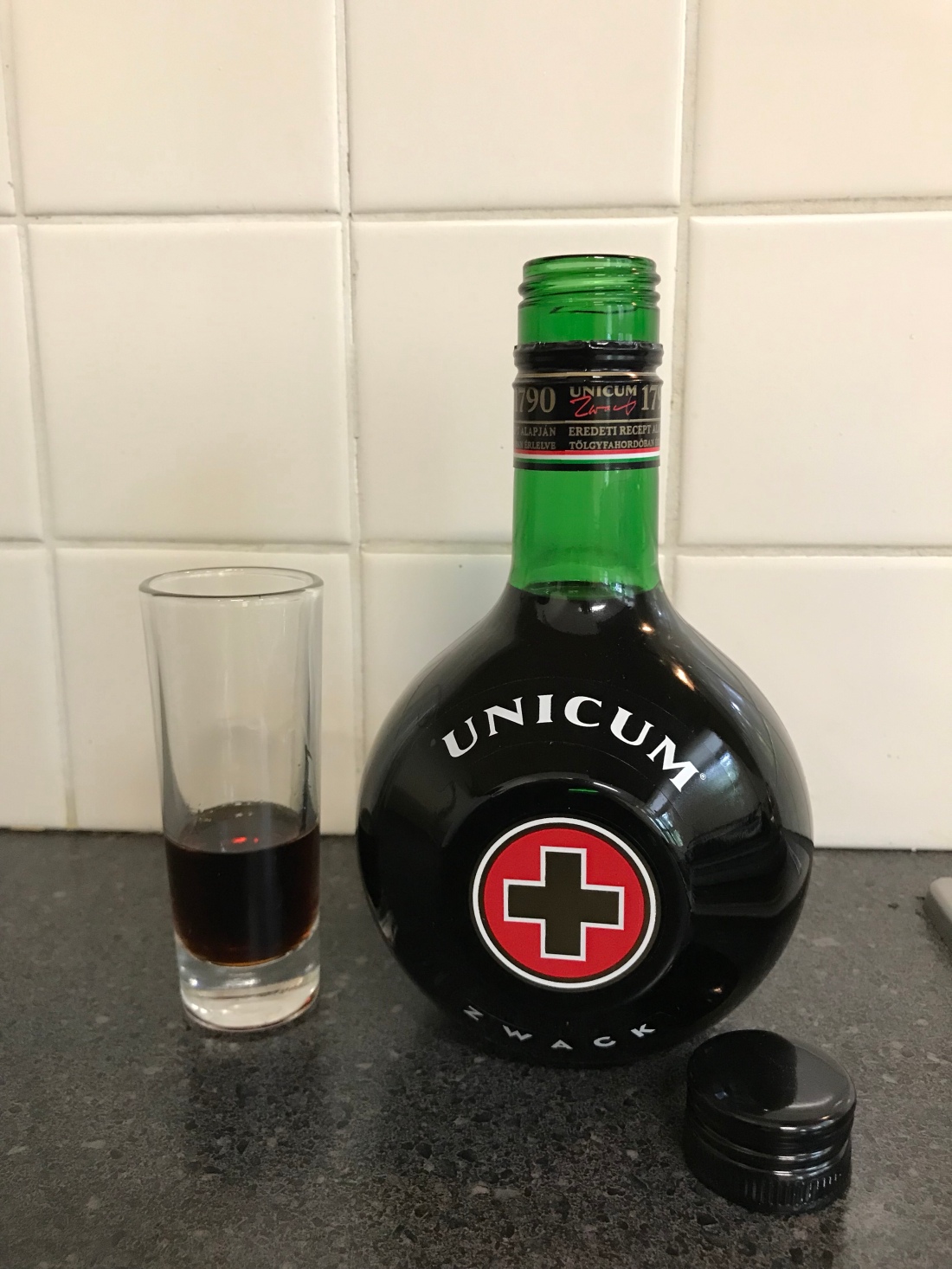 The things I get for Christmas. It’s some sort of spirit and apparently Hungarian. Not sure if it will kill me or give +10 Resistance to Magic Attacks.

Based on Wikipedia bios – note that birthplace was just the most consistent information I could get. Where an actor is ‘from’ is a bit more complicated. Colin Baker is listed here under London but grew up in Rochdale – so really should be with the actors from the North of England.

Matt Smith is the outlier from the otherwise not unusual town of Northampton (OK it is also inherently unusual because Alan Moore is from there but aside from that…).

The clusters represent major ribbons of urban development in the UK: London obviously, but then the ribbon of towns and cities from Liverpool to Manchester to Leeds and then in Scotland the towns around and between Glasgow and Edinburgh.

I do enjoy doing this. The idea of using different categories is to force me to look at the covers in different ways. It doesn’t make the scores more objective but it does encourage me to look at how covers serve multiple roles and it also makes some of the apples versus oranges comparisons easier to do. A fun side-effect is I don’t keep or look at a running score for each cover until the end. That means that I don’t know which cover was my favourite until this final post!

Of course, I probably already had a favourite and that bias will have impacted on each of the scores I gave. So I am not surprised by the top covers I picked out. Please do wade in with comments on your favourites!

I love each of these. I didn’t have a category that explicitly captures that “Oooh, I want to see what this books about!” feeling but I think each of these has that feeling for me. I’ve only read one of them though! Central Station is in my TBR pile.

The Honourable Mentions – Rank 4 and 5

All great covers. Given the arbitrary way I’m dishing out points, each of these may have made it into the top 3 if I ran my choices again with a fresh brain.

Remember that aside from one book, all of these covers had already been through a substantial set of filters. So there aren’t bad covers here, just ones that didn’t grab me quite as much as the higher ranked ones.

This also where the category system might show its bugs. I really thought I’d give Walkaway a lot more points!

Well done to Sieging Manganela – it did manage to hold its own against some big publishing house covers. Again, some nice covers here. Generally, they lost marks for reasons: not enough information or too much information, being too literal or not literal enough, and so on. All good in other ways though.

I think both of these scored poorly because they are BIG ART on a tiny cover with text on top. On reflection, my low scores seem mean and your own judgement might put these much higher. Still, somebody has to come last and it was a tough field.

Enough categories and enough lapses of judgement on my part and this monstrosity still managed to pick up some marks here and there.

Courtesy of Timothy the Talking Cat.

Opening music. These are the lyrics I made up but halfway through I had to sing them in my head because of the shush-shush noises. They go like this:

And wham! We are back into the action. Oh boy! Supreme Leader Snoke has got that darned Resistance cornered. Will he manage to wipe them out this time? You’d think so but this is a middle movie in a trilogy and that means SET BACKS for our hero.

[CF: if you can make sense of this there may be spoilers below. So not recommended if you haven’t watched the film]

END_OF_DOCUMENT_TOKEN_TO_BE_REPLACED

This week I take a look at choosing a program to write with:

I just use Notepad because I eschew formatting. I asked around to see what everybody else uses:

There are so many choices! Pick one that has the features you need for the writing you want to do. The only one I’d advise against is the one based on an ancient eldritch evil that may consume your soul i.e Microsoft Publisher.

Relevance – this category only gets 2 points because not every cover needs this and I don’t know all the books well enough to make fine distinctions. In some ways this is a simple test and also the hardest. Does the cover suggest what you are going to get? Does it match the style and contents of the book? The easiest to judge are the more Nutty Nuggets covers, the hardest to judge are the ones for more literary novels which are hard to sum up with a cover.

END_OF_DOCUMENT_TOKEN_TO_BE_REPLACED

The urge to indulge in long goodbyes proved too hard for Steven Moffat and Peter Capaldi and so we all got a Christmas special heavy on farewells. I wish they wouldn’t do this, it didn’t work for David Tennant and as much as I like Peter Capaldi, he’s had a shorter tenure and less impact on shaping the new version of the Doctor as a character. Aside from anything else, it has been a long-established character trait of the Doctor that he does his utmost to avoid long goodbyes.

Still, this was an episode that wasn’t short of ideas, jokes, references to old episodes and cameos but very short of a plot. David Bradley reprised his impersonation of the First Doctor that he’d deployed as William Hartnell in An Adventure in Time and Space to great effect. Pearl Mackie got another send-off as Bill Potts but no hint that she might reappear in the next series (no hint that she wouldn’t either).

I’d still would have preferred less obvious sentimentality and more story though.

What could be more wonderful for your book than winning an award! Emblazon on your cover a multi-pointed metallic effect badge marking your success! Perhaps win THOUSANDS of dollars in prizes! And all for $70!

I’ve been gathering a list of these strange book awards off and on for a few weeks. I gave up when I realized quite how many there are. On Twitter today Foz Meadows pointed out another one:

Thread:
So, I've just been sent an email telling me I've been "nominated" for a "best story award," though the email doesn't list a specific thing I've written and it's not clear if this is for a novel or a short story. It also asks you to "submit your entry" by clicking a link.

That award seems particularly dodgy, with an ethically dubious marketing strategy of claiming an author had already been nominated. The outfit has the prestigious sounding but oddly generic name of “The NY Literary Magazine”. (You can find it here https://nyliterarymagazine.com/best-story-award-contest )

What they offer follows a template that you can find in multiple places. Compare these two:

The price for entry varies from $20 to $100 but often accompanied by special offers, early-bird rates and other marketing gimmicks. In addition, it is not uncommon to see either ‘free’ services provided or prizes ‘worth’ some large amount of money. The prizes are typically ebook related services such as file conversion or marketing services such as ‘targetted press releases’. (e.g. https://bookexcellenceaward.com/prizes/ )

A scam? The sites themselves do not appear to be making false claims. Some of these may be operating as awards in good faith with judges and award ceremonies. However, none of them are particularly notable and a writer has no way of knowing what exactly they are paying for. Given the range of categories, the awards claim to cover it seems very unlikely that anything like a serious process is going into the selection of winners for each of these.

Here’s a selection of sites following the same model.

Am I tempted to see if Timothy could ‘win’ one of these? Maybe…;)

On my five* fortnight mission to boldly fill the space until Star Trek Discovery comes back, I’ve been looking at old Star Trek episodes that connect via topic, themes or plot with the updated version. This week it is time to head into parallel universes! But, I didn’t want to head straight to Mirror, Mirror. Instead, I went for the first episode I could find that mentioned parallel universes and that took me to The Alternative Factor.

I assume I must have seen this before but I had zero memory of it.

The Enterprise approaches a dead planet. Suddenly something really wacky happens. Spock can’t work out what it was. Star Fleet contacts Kirk and tells him the wacky thing happened everywhere but was centered near the Enterprise’s current location.

Spock discovers life signs on the planet below – which is surprising because they had previously surveyed the planet and found nothing.

They beam down and find a small space craft and then find a very agitated man called Lazarus. They take Lazarus on board the Enterprise for treatment. Lazarus warns them that he is being chased/is pursuing an evil monster who destroyed his home world.

The reality distortions continue and Lazarus is repeatedly forced to fight a foe during wacky special effects. However, Lazarus’s behavior and appearance is oddly inconsistent. Sometimes he is agitated and has a head injury and at other times he is calm and doesn’t. And no, it is not just bad continuity.

Eventually Lazarus reveals that he is a time travel. The planet below him is his former home world. His time travel invention led to a connection to a universe of anti-matter.

One version of Lazarus steals some (di)lithium crystals and then the other version does also to fix their respective time-spaceship-saucer craft.

Eventually Kirk travels to the anti-matter universe argle-bargle etc and meets the calm Lazarus. Calm Lazarus is the anti-matter version and is the good guy. Agitated Lazarus had a breakdown when he discovered the existence of anti-Lazarus to the extent that he wants to confront him in the anti-universe. Calm Lazarus explains to Kirk that the wormhole between the two universes will result in both universes being annihilated if agitated Lazarus kills calm Lazarus in the antimatter universe (the explanations are getting a bit confused at this point. But if Kirk can trap both Lazaruses (Lazarii?) within the wormhole by blowing up the time-spaceship-saucer craft on the positive Universe side then that will stop the universes exploding. Lazarus though, will end up trapped forever fighting himself within the wormhole.

So Kirk tricks Agitated Lazarus into the wormhole then blows up the time-spaceship-saucer craft. The end.

It’s not a terrible episode it just doesn’t have enough to carry the full fifty minutes. The reveal is unsurprising but still relies on a lot of exposition none of which makes much sense either within the confines of the story or scientifically.

Notably and with no fuss or bother at all, the episode also heavily features a black woman  as the engineer for the Enterprise (for this episode only). According to the Vaka Rangi blog ( http://vakarangi.blogspot.com.au/2013/06/darkseid-is-my-will-alternative-factor.html ) there was intended to be a love story sub plot between Lazarus and Chief Engineer Masters as well but some TV Networks objected. The episode certainly feels like a hefty chunk of something is missing.

Still, we get our first Trek foray into the ever fertile field of parallel universes and machines that can travel between them. It isn’t an auspicious start – more of a sketch of an idea of an episode that might have been good.

*[I haven’t checked how many fortnights it actually is]