What Are Pixel Scrolls About?

Mike Glyer’s File 770 has a daily round-up of SFF news entitled ‘Pixel Scroll’ – this is probably not news to regular readers. In a recent comment section to a scroll, a commenter said:

A regular column at a popular science fiction/fantasy online fanzine was analysed by classifying each news item against a set of broad topic areas. Particular focus was placed on four categories proposed by a critic of the column. This focus was to address the hypothesis that the articles in the column ‘are often focused on box checking’.

The analysis showed that the categories were not common and the hypothesis was rejected.

File 770 is a popular online fanzine with a history dating back to a classic paper-based fanzine. The fanzine has won several awards, as has the chief editor of the fanzine, Mike Glyer.

In recent year, rightwing critics of science fiction/fantasy publishing have claimed that ‘identity politics’ have overshadowed other aspects of the genre. This criticism reached it’s height in 2015 when a pair of controversial campaigns called ‘Sad Puppies’ and ‘Rabid Puppies’ attempted to exert significant influence over the Hugo Awards (a notable annual science fiction award program). File 770 was critical of the ‘Puppy’ campaigns.

In a recent comment section, a commenter (‘airboy’) stated that many articles were focused on ‘box checking’ and asked [US spelling]:

How many 770 news items are about:
1] The demographic composition of the writer?
2] Some book/article/panel/magazine issue that has exclusively selected people of a specific sex, race, sexual orientation, etc….. for the issue for their special perspective?
3] Analyses of the nominees/award winners/people published by a magazine because of their race, sex, sexual orientation, etc……? And the conclusion is that there are “not enough” nominees/award winners/published authors by specific race, sex and sexual orientations?
4] The cover of the book does not match the color of the writer or character?

Ninety-nine ‘Pixel Scroll’ entries were tabulated, all drawn from the seven most recent columns in a time period of 10/3/2017 to 16/3/17. Each entry was classified either against the four criteria listed (from here called the ‘airboy criteria’) or against more broad topic areas when the airboy criteria did not apply.

The more broad topic areas included “General” for entries of general news & things the authors couldn’t be bothered making up a sub-classification for, “Obits” for obituaries, “Reviews” for entries linked to or about reviews of books, films etc. Other topics included highly notable authors (Bradbury, Le Guin, Pratchett) and major SFF franchises (Star Trek, Star Wars, HHGTG). A regular set of features starting with “Today” (“Today in History”, “Today’s Birthdays” etc) were classified together as “Today’s X” to save typing.

Entries were placed on a single spreadsheet which listed the Pixel Scroll title (including date), the entry number and the classification. In some cases the numbering of entries in the Pixel Scroll omitted a number in the sequence – in these cases this was listed as ‘Item not present’.

Data was then tabulated and assorted graphs drawn mainly for the sake of drawing graphs.

Limitations of the methodology

While a large number of entries were classified, they were not sampled randomly from a broad range of Pixel Scrolls over an extended time period. Consequently, seasonal biases may be present or the distribution of entries may be affected by events specific to the period examined. However, the time period was selected to be as relevant to the currency of the airboy criteria.

The following chart shows the classifications ordered by frequency. 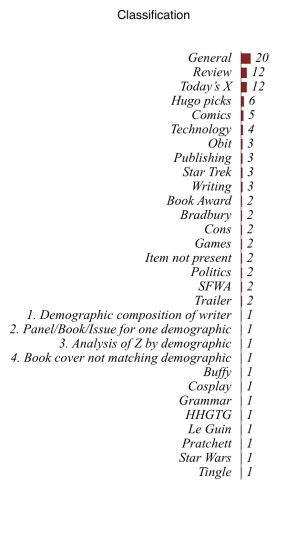 As can be seen, entries of broad general interest are the most common, followed by entries linked to reviews. Entries related to Hugo Award nominations were common but this may be a seasonal effect. The authors were surprised that so few entries were about Ray Bradbury because… I mean… like it feels like there’s ALWAYS something about Ray Bradbury. However, Timothy pointed out that often that’s in its own article and anyway, let’s face it, everybody likes Ray Bradbury one way or another.

‘Item not present’ appeared twice which resulted in a complex conspiracy theory about redacted entries from one of the authors until he was told to shut up by the other author.

The authors felt they should have had a ‘Puppies’ classification but actually there wasn’t anything that Puppy-related. One author felt that the quasi-academic tone of this paper was going awry around about here and an argument ensued over how to spell ‘awry’.

I guess there was one of each of the airboy criteria but given the large number entries classed as ‘General’ it would be possible to come up with four other things and claim they were somehow indicative of a general trend in Pixel Scrolls. One author of this paper decided that it was just argumentative nonsense and really he could have spent this time more productively, what with all that rain last night and maybe the garage was flooded. The main author became convinced that the missing entries must be about cats because, look none of the other entries were about cats.

10 responses to “What Are Pixel Scrolls About?”