The angels can syllogize, in the sense of knowing a syllogism

I’ve mocked in various ways some of Castalia House book covers but they are typically not too bad and while they lean heavily on off-the-shelf 3D models, the composition of the scenes is often good. However, the latest one from the supposed new-new-newHeinleinn-who-isnt’-Timothy is a horror: 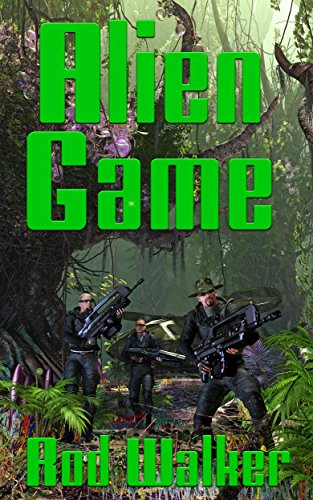 I hope those guys are literally clones in the story because they look like it. I assume the enormous guns are meant to look impressive but it just looks like somebody has made a horrible error in scale.

The background, with the jungle and the Avatarish helicoptery thing looks OK (nicely lit) but the foliage at the front looks like its pasted on to hide a mistake. The net effect is cheap and amateurish, despite the obvious effort.

Then the lurid green text over a green background. urrrgggghhhhh.

Maybe this is Vox Day’s new weapon against the forces of the left – because one look at that has me recoiling like a vampire from a crucifix.

I don’t play video games much these days due to time in general, books, other books and everything else. But I do have big Nintendo 3DS for when I just get the urge to play games rather than read on the train.

So I was quite excited to hear that a Dragon Quest game was coming out. Technically a remake of Play Station game from 2000, the new 3DS version offers updated graphics more like those used in the frankly awesome Dragon Quest 9.

Like all of the Dragon Quest games, this is a sprawling RPG with signature monsters (including the iconic little blue slimes). In this particular case, there is an additional time-travel twist which sends you back in time to a series of island communities.

Each community gets its own cringe-worthy regional accent (Yorkshire people in the volcanic ‘Emberdale’ with speech rendered in idiosyncratic vowel combinations) as well as some emotional backstory and a mystery/threat to resolve via dungeon crawling and boss-battle beating.

If you like that sort of thing (and I do) then this is hours and hours worth of fun. The usual dodgy gender stereotypes and odd sexualization of some female NPC is also sadly still there, like a voyage back to the 1980s. The customisation is not as extensive as Dragon Quest 9 and the battles are simpler and also easier. Yet, the careful parcelling out of a huge explorable world keeps the game from feeling repetitive.

Eeks! Have I taken on too much? Maybe.

So I’m going to do some culling of books with more than one cover. I’ll keep two at most per book but try and get it down to 1

The Long Way to a Small Angry Planet – Becky Chambers (2)
I’ll keep both of these because they show really different ways of covering the same book.

The Book of Phoenix – Nnedi Okorafor (2)
The first of these two covers is fine but the second one is more interesting.

Arcadia – Iain Pears (3)
I’m keeping the first two and ditching the third. Nothing wrong with number 3 but it is the least remarkable of the set

The Shepherd’s Crown by Terry Pratchett (2)
Both of these covers stay in play because they show the perennial question of how to cover Pratchett.

League of Dragons by Naomi Novak (2)
A hard choice. These two covers are too similar to keep both but too different to make it easy. I’m going to go with the second because the aged-paper background in the first is a bit old-hat for a fantasy cover.

Uprooted by Naomi Novik (3)
Clearly, Novik was tipped off about this competition and really wants a chance at winning that jpeg of Timothy. I’m going to drop the third one, although I kind of really like it.

Ancillary Mercy by Ann Leckie (2)
The Subterranean press covers of the first two books were more interesting. The art in the second looks great but as a cover, it looks like a random page from Breq-the-graphic-novel. Keeping the first.

Seveneves: A Novel by Neal Stephenson (3)
I think the first is THE Seveneves cover. The second is a bit generic and including an image of the moon is arguably in bad taste considering…

War Factory, Neal Asher (2)
Different but sort of the same. Keeping the first.

Sorcerer to the Crown, Zen Cho (3)
I just don’t like the first all-red cover – also Naomi Novik has sneaked in again! :). Keeping the other two.

Half a War, Joe Abercrombie (3)
All serviceable covers, but the first one is the notable one. The other two are fairly generic fantasy covers – nice art but unremarkable. Mind you…am I only saying that because I’m a Guardian reader? Note the first has a review blurb from the Guardian and the second has a review blurb from the Daily Mail. Talk about market segmentation! Damn, there is a whole Dave Freer essay to be made out of that (assuming Dave gets the sociopolitical, regional and economic flags inherent to a British audience going ‘oooh the Guardian likes it’ versus ‘oooh the Daily Mail likes it’) 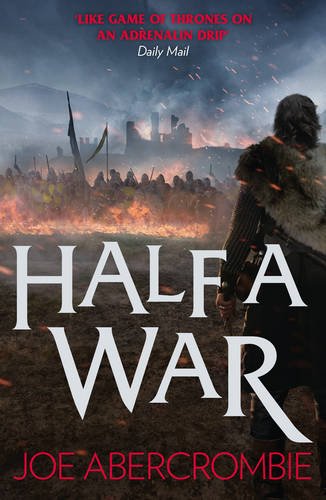 The Traitor, Baru Cormorant – Seth Dickinson (2)
The first is powerful and the second is OK. Keeping the first.

I thought this post of John C Wright’s was quite good: http://www.scifiwright.com/2016/09/parable-of-the-naughts-and-crosses/

While I disagreed with a lot of it, it was thoughtful and structured. Indeed, it makes the contrast with his posts on Islam, politics or sexuality seem worse in comparison – Wright is capable of arguing on the basis of something other than appeals to fear and mangled history.

There are two elements intertwined here.

I’ll come back to point 1. later as this is the issue on which I made comments and to which there were interesting replies.

Suppose you had a deck, not of 52 cards, but of each move of the 255,168 possible unique tic-tac-toe games. The cards are kept in a chest of drawers. Each drawer is also marked with a diagram of a possible board. Within each drawer is every legal move that can be made in response.

Two instructions are carved into the top of the chest of drawers. The first says to compare the diagram on the drawer with the board, open the drawer, and play a card within. The second says that, as you play each game, whenever you lose, you throw away the card representing the losing move from the drawer representing the previous move. That way, next time you play the game, the move that lost is not the one among the available options to play from that drawer.

Now, suppose your grandfather avidly played tictactoe and carefully threw out every card that represents a losing move. The Naughts and Crosses chest would now only contain cards leading to victory or stalemate.

Again, suppose you inherit the chest and do not know the rules of the game, and no one ever told you the victory conditions. Nonetheless, merely by following the instructions carved in the lid of how to open the drawer and play a card taken blindly from inside that drawer, you can win or stalemate every game.

Now suppose a philosopher strolls up while you are on the last move of a winning game. There are two crosses in in the upper left and right squares, and your opponent has not placed a naught in the upper middle square to block.

You inspect the board, find the drawer that represents it, and open it. Inside is a single card showing the winning move. You follow the card’s instructions and place a third cross in the upper middle square.

The philosopher asks, “Why did you make that move? What was your aim?”

You explain the mechanisms of the chest carefully to him. You show him that your grandfather threw out all the other cards which would have you place a cross elsewhere on the board. There was only one card in this drawer.

The philosopher says, “No, you have told me the mechanics of how you select which move to play. You have not told me what the purpose, point, or aim of the move itself is.”

You look carefully over the chest of drawers. Nowhere are the rules of ticatactoe written down, nor the victory conditions.

The other player says, “The victory condition is to place three a row, either horizontally, diagonally, or vertically.”

Now, studying the chest of drawers a second time, you do notice that all the possible moves of the cards your grandfather did not throw away do, in fact, fit the pattern of being intentional moves meant to bring about the three in a row for crosses while preventing three in a row for naughts.

The pattern is not in the chest, but in the head of you, the gameplayer.

Firstly, it is worth pointing out that it certainly is possible to create a machine learning noughts-and-crosses machine using very basic technology. I can’t find the reference, but in one of Martin Gardener’s many books of recreational maths, he had an example that worked stochastically with marbles in matchboxes. The mechanics of Wright’s example are not at issue.

Some commenters drew comparisons between Wright’s example and John Searle’s Chinese Room analogy. Wright’s example is both stronger and weaker. It is weaker in the sense that it isn’t directly addressing an artificial intelligence and stronger for the same reason. He is using an example of something that could be built and then pointing out that even though this thing could ‘play’ tic-tac-toe very well there is no meaning to be found anywhere in it.

Wright returns to the first point at the end of the post:

I think this has a clear answer and that answer helps us start to untangle what is going on, but I’ll save that for another post.

George Phillies posted this comment about the N3f Neffie Awards. Elevating it:

“Neffy Award Winners
The 2016 Neffy Award winners have been chosen. The winners are :
Best Novel: Shadows of Self—Brandon Sanderson
Best Paper Series Novel: Schooled in Magic—Chris Nuttall
Best Editor: Toni Weisskopf (Baen)
Best TV Show: Supergirl
Best Comic: Girl Genius
Best Film: The Martian
In other News, the N3f will actually be launching three magazines, not one, counting Tightbeam (new issue out recently after a year or so hiatus). Tightbeam is letters and reviews. It will be bimonthly or more often if material arrives. It’s now all-electronic; the new Editor, Bob Jennings, believes that ezines need to be somewhat short or they will not be read. Eldritch Science (my old zine) will be fiction, poetry, and art. It will be all electronic, and accept material of up to novel-length and down to 7500 words for prose. The Editor is George Phillies. Ionosphere, returning after three or four decades, will be run by the Fan-Pro Coordinating Committee. It will be all-electronic, at a publication rate to be determined. John Thiel is Committee Head and Editor. We already publish The National Fantasy Fan (news) and N’APA (bimonthly APA).”

Which makes a sizeable list – so I’m calling it done. Thanks to JJ for finding Internet Science Fiction Database links. Full list is now:

Zoiks! I’ve some work to do! I’m going to add artist/designer credits were possible – so bear with me! (This is an ancient cry to a bear god to sustain you in times of trouble)

Hardly seems worth the wait somehow 🙂